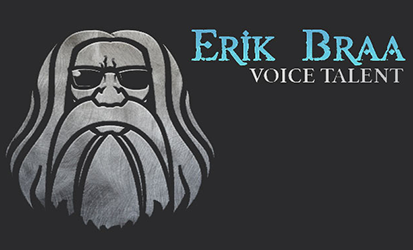 Update Required To play the media you will need to either update your browser to a recent version or update your Flash plugin.

Erik has recently been lending his talents to 3 lb. Magician, a collective of creatives from the San Francisco Bay Area who are working their magic to create new, original content.

Most recently, Erik and the team have put together two original podcasts:

Can't sleep? Let the dulcet voice of Erik reading the classics take over for jumping sheep. These tales, narrated in a soothing, calm voice are designed to turn sleeplessness to somnolence. Tune in, zonk out.

Some are funny. Some are weird. Every single one of the short stories narrated by Erik in this production are guaranteed to tickle your 3 lb. Magician (in case you were wondering what the name references, the human brain weighs three pounds).

In addition to his extensive voice work on their first audio drama, Clarion Dawn, Erik has hosted the behind-the-scenes after show, Talking Dawn:

Erik is a versatile actor with a growing resume of voice work in video games, commercials, and on screen work in movies, shorts, and TV shows.

For more about what Erik's done, check out his IMDB profile!

Cue the Horns from the marauding raiders! Erik is the #VikingofVoice...well, he is a Viking for anything really. He got his start in video games and has garnered success in all areas of acting. Most well-known as the voice of "Draven", "Jax", and "VelKoz" in League of Legends. He has lent his voice to hundreds of games, from Heroes of the Storm and many Blizzard titles, to The Walking Dead game for Telltale Games. You can hear him doing Audiobooks like "White Tiger Legend" and Stories like "TransSiberian Railroad" in the Calm app, as well as Commercials and Promos. Pillaging SoundBooths everywhere, here comes the Viking! The Viking of Voiceover!

You can book Erik for work in the Los Angeles area by contacting Dean Panaro Talent.

Or, fill out the form below to get a message to Erik directly: